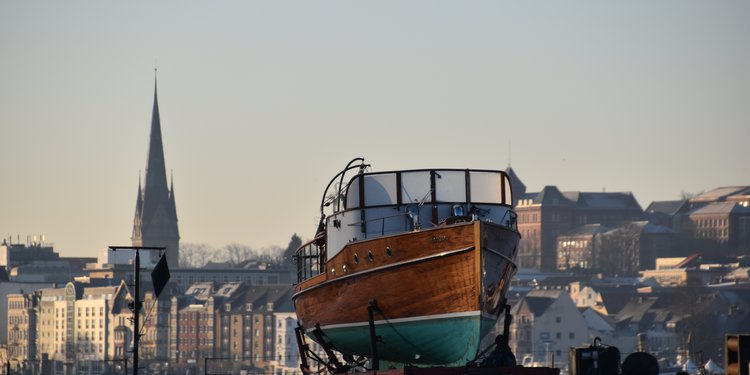 The Finnish tug boat group Alfons Håkans is now the owner of Airawata. The Managing Director of the group, Joakim Håkans, intends to keep Airawata in use, which is in line with his idea is to give the Åbo Båtvarf’s legendary history a new life. That is why the premises has been opened to the public after vast renovations.

”I like beautiful things, but I also like to see ”a red thread”, a theme, in things we do here. A living cultural heritage is more important to me than a museum. Airawata is a beautiful motoryacht, but she returns to the place where she was built 95 years ago to be used as a charter yacht. I think the old classics should be used rather than to be stored in showcases”, Håkans says.

If everything goes according to plan, Alfons Håkans tug Kraft will arrive in Turku with Airawata on the barge Scanbarge on Saturday. Airawata started her journey from Flensburg, Germany, where she belonged to Thomas Kuhmann.

Joakim Håkans does not admit that he would be collecting boats and yachts built at the Åbo Båtvarf. He already owns the Merenneito II, the legendary 6mR class racing yacht built in 1928:

”Well, let me put it like this; Maybe I collect such boats and yachts…”

Airawata’s capacity is 12 passengers, which makes her perfect for exclusive cruises for companies’ steering groups and other special occasions.

”Ruissalon Telakka is a well know place for festivities. In fact, we have had tens of wedding parties, concerts, and congresses in Åbo Båtvarf’s old construction hall. What could be nicer than to arrive to your wedding party in Airawata”, Håkans asks.