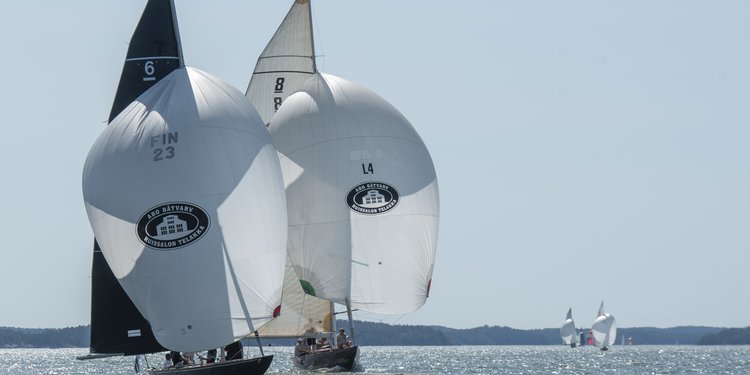 Åbo Båtvarf boatyard and its legacy are of high value to Alfons Håkans. The beautiful products of the historical yard are built for sailing and that is exactly what the current collection of classic yachts are there for. They are also made available for young but also more experienced sailing enthusiasts who don’t own their own boats.

Racing on the Classic Beauties

Team Åbo Båtvarv can be proud and happy about the results and reactions during the active summer 2019. Three beautiful classic yachts built at the historical Åbo Båtvarf boatyard have made an extremely positive statement at several regattas:

International five-metre-class yacht Barbro, a Gunnar L. Stenbäck design from 1936, participated in every national classic regatta during the summer. The results are impressive: first place in the national ranking series, runner-up on even points with the winner in the Finnish championships, 4 first and 3 second places in the season’s regattas. An additional reason to be proud of is that all together 15 sailors took part in the summer’s racing activities on Barbro, which sails by a crew of 3. Hence Barbro’s summer program has reached an unexceptionally large group of sailing enthusiasts while still performing on the highest level in her class.

Merenneito II, a six-metre-class yacht by Zaké Westin, also had a rather busy summer. Her 5-strong crew was built from young dinghy sailing talents combined with more experienced keelboat sailors as the mentors. Two experienced skippers lead the eager youngsters in the age of 16 to 18 years to many new and memorable moments in several regattas during the summer. Team Åbo Båtvarv’s co-operation with the head organisation of Finnish Sailing gave the youth national sailing team members a unique opportunity to test their skills and team working abilities in a very different sailing environment. The reactions and feedback has been throughout positive while at its best the young team was successfully challenging the international top teams in their class, including Spain’s ex-king HM Juan Carlos’ professional racing crew in the 6 Metre World Championships in Hanko.

The flagship of Team Åbo Båtvarv, eight-metre-class yacht Sphinx, has sailed only in her new home waters this summer. The beautiful Gustaf Estlander design represented the local yacht club Airisto Segelsällskap in the Airisto Classic Regatta hosted by Åbo Båtvarv. The veteran team on the fifteen-metre-long varnished mahogany beauty finished its season in the September classic of Mustfinnö Cup while already planning a return to international waters and Eight Metre World Cup to be sailed in Dutch waters in 2020.

Monday Classics by Al Mare Sailing is a program lead by young enthusiastic student sailors. The initiative by Åbo Båtvarv has been well received by mainly the young boat-less sailors. Four (and next year five) five-metre-class yachts have been offered for the students to run their own sailing program once a week during the summer season. Monday was chosen by the students as the least action-full day of the week previously. Åbo Båtvarv co-ordinates and backs up the equipment whereof three boats are owned by Åbo Båtvarv harbour’s regular customers while Barbro and the most recent addition to the Åbo Båtvarv fleet, five-metre-yacht Marianne complete the training fleet.