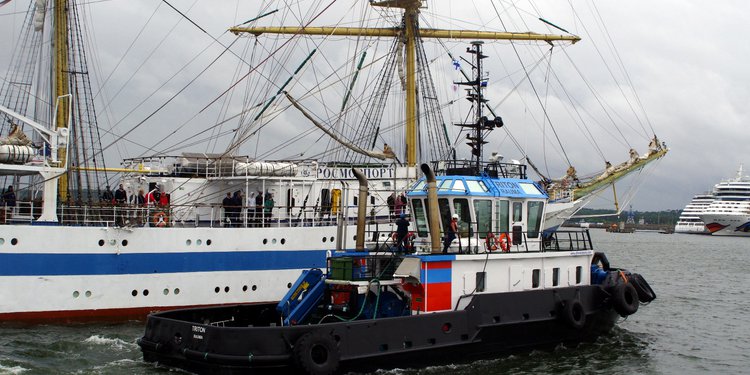 A part of the Tall Ships Race fleet decided to visit Tallinn for a short visit on the way from Kotka to Turku.

And, just like in Kotka and in Turku, there will not be beautiful sailing ships by the quay without our tugs.

The Tug Triton assisted most of the ships in to the Tallinn berth in grey and rainy conditions.

Captain Jurij Kudrjavcev on Arkturus assisted the Triton, but this time in a somewhat unusual role. The Arkturus functioned as a media tugboat, since the towing operations of the tall ships had caught the interest of the Estonian media.

Alfons Håkans Commercial Manager in Tallinn Deniss Lazarevs was watching the Triton assisting the over one-hundred-meter-long Mir. Apart from the rain everything went just the way it should.

– These are well known ships to our crews. Many of our tug boat captains have been sailing on the Mir, Sedov, and Kruzensstern, Lazarevs says.

The Tall Ships visited Tallin during the local Sea Days, the Merepäevad. Alfons Håkans is one of the main sponsors of the yearly event.

Madis Rallman is member of the board of The STA Estonia, which is one of the organizations behind the Sea Days. He says that the Alfons Håkans tugboat operations have been widely admired by all partners.

– The tugs have operated professionally and fast. They could not have been performing better. Without Alfons Håkans tugs we would not be able to have any tall ships here, Rallman says.

The STA Estonia i an organization that aims to develop and educate Estonian young people, and give them the opportunity to sail and participate in international regattas. ETA Estonia collaborates with Sail Training International and neighboring sailing companies.

– Our wish is for every young Estonian to experience sea voyage and understand what Estonia means as a sea country. That is why we provide young people with a chance to take part in the international offshore regatta, Rallman says.

Due to Deniss Lazarevs the tug market has been quite stable in Estonia and Latvia for quite some time:

– The Russian transito traffic is still keeping us busy in our ports. In Finland, the activity in the ports is now growing due to economic growth. The markets north of the Finnish bay are not alike the markets south of the Gulf.