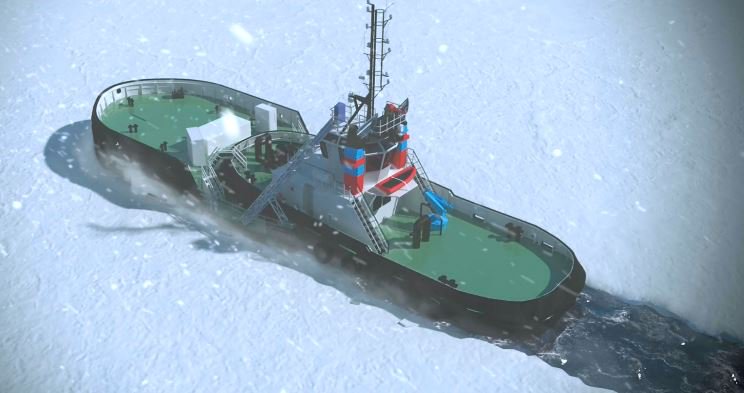 Can a propelled lose bow pushed by a tugboat perform as well as a big state icebreaker? Alfons Håkans’ Managing Director Joakim Håkans believs so. Now the concept will be methodically tested. Illustration: ILS Oy

The idea that Alfons Håkans’ Managing Director Joakim Håkans came up with some half a dozen years ago is now going to be tested on the Finnish lake of Saimaa; a tugboat breaking ice by pushing a propelled lose bow.

The lose bow will be pushed by Alfons Håkans’ tug Calypso during the coming ten years.

The testing and the developing of an icebreaking lose bow with propulsion is part of the EU program WINMOS II (Winter Navigation Motorways of the Sea II). The Finnish Transport Agency agreed on a contract with Turun Korjaustelakka, in Naantali, Finland, on building the bow.

The Transport Agency’s third partner in the project is the Finnish naval architecture and marine engineering company ILS.

The real piece of news is not the bow, but the lose bow with propulsion, which could mean that the icebreaking capacity could match the biggest state icebreakers’ performance.

– The lose bow as such is not a new concept. We used a lose bow for ice breaking together with a pushing tugboat in the 1980’s. But this bow was nothing else than a huge “spoon” pushed by a tugboat, Alfons Håkans Managing Director Joakim Håkans explains.

The idea of an icebreaking lose bow with propulsion struck Håkans half a dozen of years ago.

– I started to think if it would be possible to use the same concept, but in a larger scale. I wanted to know if a lose bow with propulsion could do the same job as the big state icebreakers. The cost of this kind of a lose bow would be some 20 percent of the cost of a big icebreaker’s. And when the season is over, you just leave the bow waiting for the next season, while the pusher can work during the open water season with other jobs. This would mean huge savings. The idea behind this concept is purely one of efficiency and cost cutting, Håkans explains.

Since icebreaking is about mass and power, Håkans says he immediately realized that it would be impossible to break wider ice channels and thicker ice with lose bows without propulsion.

– It remains to be seem if the bow should have pushing or pulling propulsion.

Håkans says that he presented the idea of the lose bow with propulsion for the ILS some years ago, and he was being convinced of that there could be something in the idea.

– Their calculations showed that it seemed like I could be right. And here we are now – starting to test the concept, which I think is very interesting for future of icebreaking, Håkans says.